Uno Variations started in 2011 when we were playing one of our Uno games and we decided we should try to spice it up with some sort of variation. However, a quick Google search for "Uno variations" led to only a few mediocre attempts, most of which sounded boring or included rules that we have already made part of our house rules. So, we decided to make our own variations and share them with others.

Since that time, our collection of Uno cards has grown immensely. This picture represents only a fraction of our current collection. 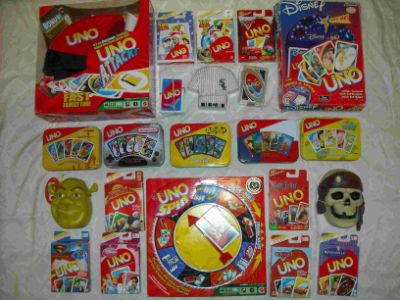 Over time, this site has also grown to include a catalog of the many different versions of Uno, as well as the rules that make each Uno theme deck unique.

Uno Variations is very much a community effort. We regularly receive emails from dedicated Uno enthusiasts who share their own unique ways of playing Uno, as well as adding to the ever-expanding information on various editions of Uno. Thank you for your contributions and support!