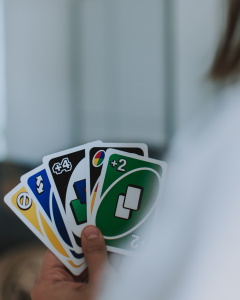 This is a summary of the standard rules of the Uno card game. If you are looking for a replacement set of instructions, an official English or Spanish set can be printed directly from Mattel's website. If you are looking for the rules for a Special Wild card that is unique to each deck of Uno cards, you might find it on the ever-growing Unique Wild Card Rules page. Once you are familiar with the basic, old-school rules of Uno, check out our Uno Gameplay Variations to shake things up.

Contents of an Uno Deck

A standard deck of Uno cards consists of 108 cards:

Object of the Game

Each player is dealt 7 cards. The unused cards are placed face-down as the draw pile and the top card is flipped face-up next to the draw pile to form the discard pile.

How to Play Uno

Play begins with the person left of the dealer and continues in a clockwise direction. If the card flipped over to form the discard pile is an Action Card, that action is applied to the first player (i.e. skipped turn for a skip card, choose the color of play for a Wild card, etc.). If the first card is a Wild Draw 4 card, it is returned to the deck and another card is flipped over.

On a player's turn, the player may play a card from their hand to the discard pile if the card either matches the color or the symbol of the card on top of the discard pile (i.e. a red card on a red card; a skip card on a skip card, etc.). A player may also play a Wild card on top of any card and may play a Wild Draw 4 card on any card in limited circumstances (see Action Cards below).

If a player cannot play a card or chooses not to play a card, she must draw a card from the draw pile. If that card is playable, the player may play that card immediately, but may not play any other card in their hand. If the draw pile is depleted, the discard pile (except the top card) is shuffled and becomes the new draw pile.

When a player plays their second to last card, he must yell "Uno" to indicate that he only has one card left. If he forgets to yell "Uno" and is caught before the next player begins their turn, he must draw two cards from the draw pile.

When a player plays their last card, the round is over. If the last card is a Draw 2 card or a Wild Draw 4 card, the next player still draws the corresponding number of cards.

Draw 2 Card: The next player must draw two cards and forfeit their turn.

Reverse Card: The direction of play is reversed.

In the early 2000s, the official rules of Uno provided that in a 2 player game, a reverse card acted as a Skip Card. This rule was removed from later Uno instruction manuals and it is not clear whether it is still officially supported.

Skip Card: The next player misses their turn.

Wild Card: The player who plays this card chooses any color of play (including the current color).

Other Wild Card: Almost all themed Uno decks come with a set of 4 Wild cards that are unique to that deck. These Wild cards will have a unique effect (e.g. draw until you get a red card, choose any player to draw 3 cards, etc.) and then let the person who played it choose the new color of play. Many of these unique wild card rules can be found here. If you can't find the rules for your specific Wild card, you can remove the special Wild cards to create a standard 108 card Uno deck, treat these unique Wild cards as standard Wild cards, or pick any unique Wild card rule to use when this card is played.

Stacking draw cards is not allowed under the official rules of Uno. However, if everyone in your group is willing to modify the rules, feel free to add in some House Rules, including Stacking Draw 2 and Draw 4 cards.