Brad Schultz from Clovis, CA is a massive Uno fan and collector who has created Mega Uno, the most complex game of Uno ever played. As of this writing, Brad currently has 315 Uno games! We connected with him to share his Uno collector story. Read below for more about his Uno journey and his masterpiece, Mega Uno. If you collect Uno games, contact us and share your story. We'd love to hear about and potentially feature you in an article.

I grew up in Huntington Beach, CA and I began collecting Uno when I was 13 years old. I had some Christmas money in my pocket and found myself at a local Walmart making my way through the toy aisle. Here I found Uno Attack. Up until this point in life I had never actually played Uno before. However, sparks fly in my mind when I see variants, versions, sequels, and expansions of games. So what did I do? I Bought Original Uno, Uno Attack, and an Uno Attack refill deck. Little did I know that this would begin a 17 year (and counting) obsession.


How did Mega Uno come about and where has it taken you?

Mega Uno is a game that I created when I was going into my junior year of high school. My collection had grown to include Uno Spin, Uno H2O, H2O Splash, and Uno Flash. We thought it would be cool to combine every game I had into one epic game that ended in two people going head to head in a round of Uno Flash. Throughout high school and college I played Mega Uno with my friends and used it as a way to pull people away from parties and bad crowds. We played most Friday nights and all sorts of people who would usually never hang out became great friends. After I got married, I put the game to rest because I couldn’t bring my collection with me into my tiny little apartment. After a few years went by I became the youth pastor at my church and I began investing in the lives of a group of high school guys. What better way to do this than to introduce them to Mega Uno? I brought the collection over to the church and we ushered in a whole new generation of players. Years went by, the group grew, and more and more people fell in love with the game that I had created. In 2020, my family and I moved away to Clovis, CA and took the collection with me. It was a sad day but I knew the games would continue. Since the move, we have found a new church, a new youth group, and a new group of players to keep Mega Uno alive. There is even a group of committed guys from Huntington Beach who still make the 4-hour pilgrimage up to Clovis every month to play some games. In the past 15 years, over 100 people have played Mega Uno and each one of them will always remember the craziest version of Uno ever created. Beyond playing a game, we have created and facilitated an experience for guys who bond over a card game in my garage. It is more than a game; it is a community of camaraderie and competition that I hope will continue for decades to come.

Mega Uno has played such a huge role in my life that I decided back in 2018 to begin writing a memoir of the history of Mega Uno and how it has impacted the lives of the people around me. Two years and 100 plus pages later, I finished it and was able to give it to my closest friends before we moved away from Huntington Beach.

[Editorial note: Brad has graciously allowed us to share his Mega Uno memoir. If you are interested in hearing the whole story of Mega Uno, we would highly recommend it.]

What Exactly Is Mega Uno?

Mega Uno is a game that I created that consists of 5 rounds. The first round is called Pregame and this takes place at the beginning of the night to seed people for the rest of the games. This is a fast-paced, timed round that is usually very chaotic. The second round is called Core and it consists of hundreds of special edition decks all shuffled together. In each special edition deck there are special cards with unique rules that we have created. An Uno Attack is placed in the center of the table and if a player cannot play they press the Attack instead of drawing cards. When an Uno Spin card comes up, the next player spins the wheel. When a Splash card comes up, the next player spins the whirlpool. When a Tiki Twist command comes up, then the player spins the Tiki man. When a flip command comes up the player flips an Uno man and so on. Core continues until four people go out. Those four people move on to the Wild Card round. This is a double-elimination bracket that is played using randomly drawn card-based Uno variants that cannot be added to Core such as Uno Flip!, Uno Slam, Uno Blast, Uno Reflex, Uno Roboto, and others. Three people move on to Playoffs which is a single-elimination round that is played using one of several non-card based Uno games such as Uno Wild Tiles, Uno Rummy Up, Uno Stacko, Uno Dice, Uno Dominos, and others. Finally two people meet head to head in a game of Uno Flash where each player controls two buttons. The winner forever gets their name on the scoreboard.

[Editorial note: For anyone interested in playing Mega Uno (or a variation of it if you don't own all the necessary Uno games), you can download the Mega Uno rules and the Mega Uno special card rules. If you end up playing it, be sure to contact us and let us know. We'll be sure to pass your experience on to Brad.]

The Life of an Uno Collector

What is in your future for Uno playing and collecting?

I would love to continue collecting and playing Uno as long as I am alive. I am always on the hunt for new and rare games of Uno that I can add to my collection. Few things excite me more than finding a brand new version of Uno hit the shelves.

[Editorial note: If you are also collecting UNO decks, check out our complete list of Uno decks and spinoffs]

I currently own 315 Uno games.

At the time I bought it, Uno Hearts was very difficult to find. I remember the bid war happening on eBay. In fact, I had to set a timer on my phone and rush over to the library during high school hours so I could log on and outbid someone in the last 5 seconds. 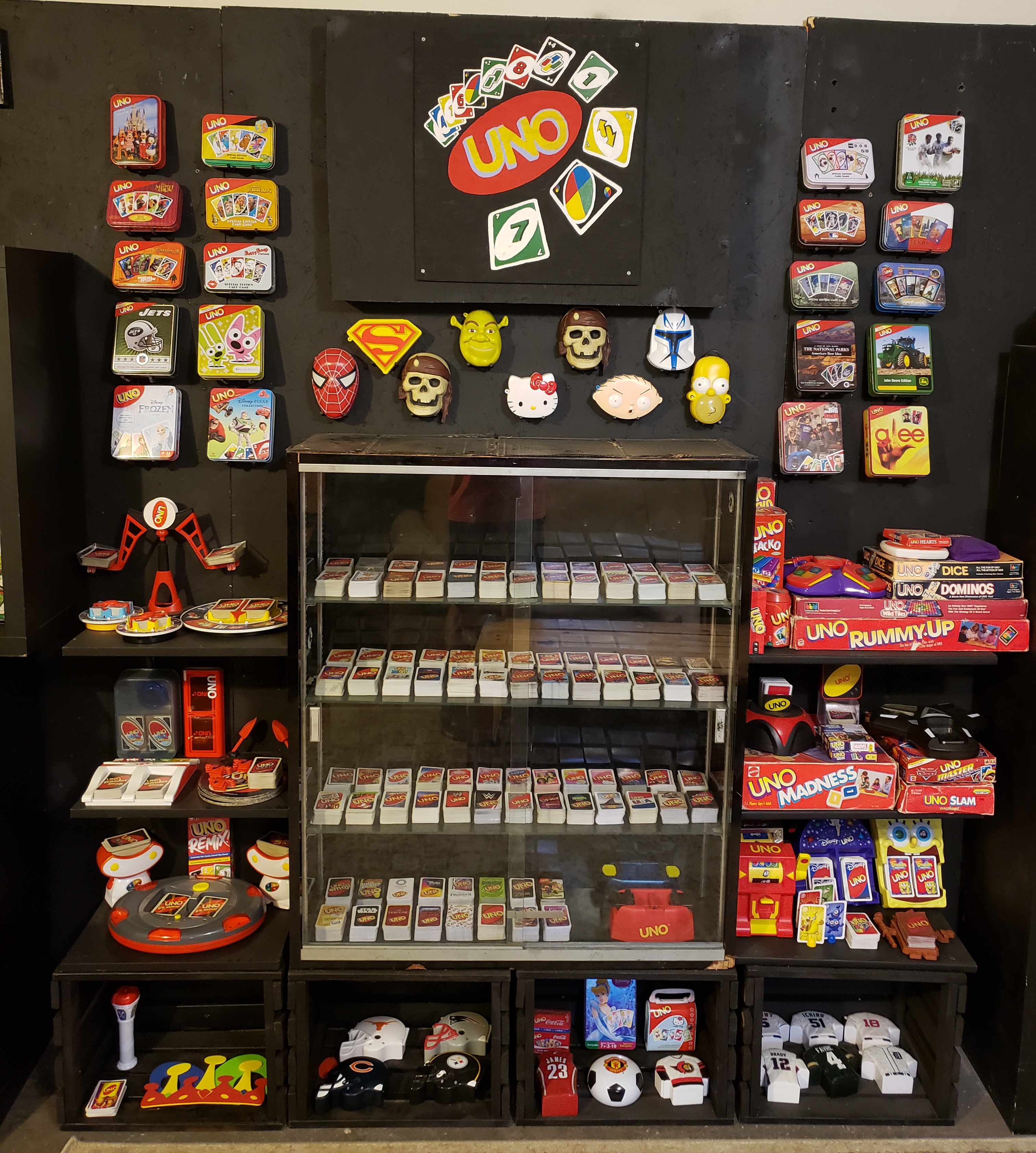 X Games Uno is my favorite Uno deck because of how many special cards it has. It is one of the few special edition decks that I can play on its own and still have a pretty cutthroat game. You definitely won’t get bored playing Uno with all the surprises built into this deck.

What is your favorite Uno spinoff game? Why?

Uno Flash is my favorite Uno game because it was the game that started it all. Mega Uno truly became what it was when Uno Flash came out. Up until that point we just mixed some decks together and played a few games. When Uno Flash entered the game it upped the stakes because two people had to fight not to be eliminated and face off in a very intense finale. I love Uno Flip!, Uno Triple Play, and plenty of other games that have come out since, but Uno Flash will always have that special place in my heart.

I would like to thank the Uno Men, past, present, and future, for participating in the world's most epic version of Uno. I may be the driving force behind Mega Uno but without all the people willing and excited to play, it would just be a cool idea in my head. Mega Uno and my collection would not be what it is today without the many people that have participated in some way shape or form. Whether it be faithfully showing up ready to play, helping me invest financially in my collection, or spending hundreds of hours making rules and making Mega Uno more epic; I owe a lot to the friends I've made over the years. I would just be some guy with a mountain of games if it wasn't for committed guys like Andy Grunbaum, Aj Libunao, Jonathan Brooks, Grant Phillips, Jay Markham, Dan Carter, Jason and Steven Ezzat, Craig Fast, Freddy William, Oriel Dominguez, Josh Surico, Alex Collins, Sam Heinrichs, Evan Harris, Eli Borsch, Tyler Hawkyard, Micah Carpenter, and Tony Hernandez who have turned out ready for Uno nights over the past 15 years. Beyond that, there are specific individuals that deserve my greatest thanks because without them there would be no Mega Uno:

A special thanks to Brad for being willing to share Mega Uno and his collection with us! If you'd like to reach out to Brad, you can contact him at bradschultz1991@gmail.com.