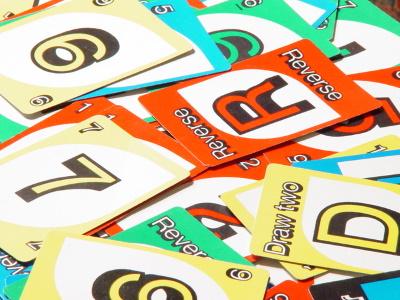 This variation is the Uno twist to the classic game of "Go Fish."

Skip to the next section if you are already familiar with how to play Go Fish.

Each player is dealt 7 cards and the remaining cards are placed face down in a pile. Starting with the player to the left of the dealer, each player asks any specific player for any number card that she currently has (e.g. "Do you have any 9's?).

If the asked player has any cards of that number, he must give the asking player all of his cards of that number. The asking player then continues her turn by asking any player for another card (including the card that she just received). If the asked player does not have the requested card, he says "Go fish" and the asking player draws a card from the draw pile ("Fishing Hole") and ends her turn. In the event that a player draws the card that she just asked for, she will show that card to the other players as proof and take another turn.

If at any time during the game a player gets 4 cards of one number (a "set"), he may place the set face-up in front of him and no player can take those cards from him. Each of these sets will count as points at the end of the game (described below).

Each of the non-number special cards has a special effect when played. These cards are played face-up in a discard pile next to the draw pile:

Sets are worth 1 point each, except the set of the number "0," which is 3 points. If at the end of the game, a player has any Skip or Reverse cards left in his hand, those cards (regardless of how many he has) count as 5 points.

The player with the most points at the end of the game (or predetermined series of games) is the winner.

This game is the perfect blend of the memory elements of "Go Fish" and the strategy elements of Uno. The special cards keep the game fresh and the 5 point rule for unplayed Skip and Reverse cards usually prevents a player from claiming a victory until the very end of the game.

This game is slower moving than regular Uno and it can be extremely frustrating when a person gets a string of luck that makes their turn last a long time. This can be a big problem when playing with more than 4 people. The rules and strategy may also take players longer to learn (particularly the strategy behind saving Skip and Reverse cards).

Rainbow Fish is a great twist on both Uno and "Go Fish." It is also flexible enough that players can tweak the rules to find what works best for them. Happy fishing!