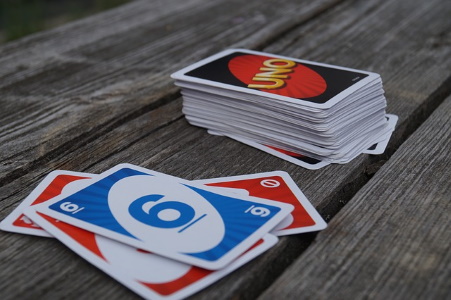 These are the variations that we liked enough to make our default rules. Play according to official Uno rules except where they conflict with the following rules:

This variation turns Uno into a fast-moving game with a slightly more strategy involved in winning each round (particularly with the Draw 2s). This game is easily repeated to allow all a chance for some sort of victory, even those with less experience. And it is particularly fun for 2 player games.

The main disadvantage to this variation is that some strategy is removed by taking out the scoring.

A great variation for quick, fun, casual games of Uno with a bit of an edge. Feel free to use and modify these rules to create your own house rules. Also, if you come up with any you particularly like, please share them!