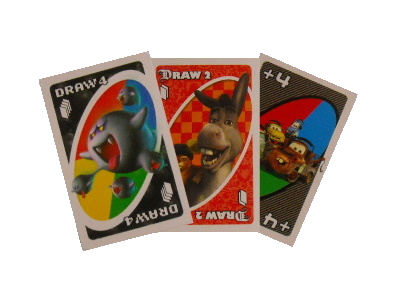 No, the official rules of Uno do not allow you to stack Draw 2 cards or Draw 4 cards. However, most serious Uno players allow rules for stacking draw cards in some form.

Stacking can also apply to Draw 4 cards, where a player can play another Draw 4 to cause the next player to draw 8 cards.

Although less common, another variation allows Draw 2 cards to stack on Draw 4 cards and vice versa, which causes the card effects to grow much steeper (drawing 12 cards is not uncommon).

Stacking rules are common for a reason. They are extremely fun and they add an additional strategic element to Uno as starting the chain of drawing cards can backfire. This also tends to speed up games a little bit because there is less back and forth of drawing cards as the person with more Draw 2/Draw 4 cards can avoid drawing cards for longer.

The only disadvantage to this variation is that once a player draws a large number of cards (such as 8 cards), they likely can start a new chain of drawing cards. In the end, this tends to balance the game more than break it.

I am surprised that Mattel has not officially adopted stacking rules into their official rules, at least as a variation. These rules are so well-known and so well-used (for good reason) that they should be standard for any regular Uno player.